The End Of The World As We Know It

Remember that feeling? It was November 3, 2016. Some of us "Progressives" went to bed early because it was in the bag. Me, I'm a news junkie and I stayed up. I was missing Walter Cronkite, because the lineup of respected "Pundits" was blathering on and on.
I can't remember exactly but I was probably writing ( I often do that). With my jaw hanging open I turned my attention back to the Pundits; did I just hear that? I changed the channel several times, yes I just heard that, "With 92% of the votes reported CNN is now calling Donald J. Trump the winner and next President of the United States"
"ummm..." I thought; also "WTF" and several other things. There may have been some scatology involved and possibly tears I was, after all, in shock.
Think back to that day. Remember how it felt when you found out that this self-promoting, sociopathic, ass-clown was President Elect.
I grew up in Hackensack NJ. It is a stone's throw from New York City. I read the Bergen Record every day, sometimes twice while I was growing up. I read the NY Times as often as I could. Trump, the rich, rapacious, spoiled failure (ass-clown) figured prominently most days. He was a dirty joke, a symbol of everything that was wrong with America.
He called in to radio shows pretending to be someone else promoting "The Donald", even the interviewer knew who it really was but they played along. He mugged for the camera in any way he could and shamelessly lied about his successes, when everyone knew his successes were basically due to Daddy throwing money at his massive failures. I think he was up to 3 bankruptcies by then, but I didn't check my facts.
He was an ignorant, arrogant, self promoting rich kid who would have been selling mobile homes if not for Daddy's money. Oh yeah, he was always that ugly and stupid but he did know how to promote himself. That is what he craved; the Limelight. He used Daddy's money to take out a full page ad in the NY Times to call for the death penalty on 5 kids of color who turned out to be innocent. He did not retract it or apologize when they arrested the real criminals.
I realized my mouth was still open.
I don't know how many people cried, cursed or contemplated suicide that night. I'm not sure how many self-satisfied "Progressives" woke up the next morning and sat over their coffee in shocked dis-belief, but I'll bet there were many.
"How could this happen in the USA?" I may have said that aloud, possibly to Rachel Maddow who was on the TV at the moment.
I realized my mouth was still open.
If you want another moment like that, just don't vote. If you want to get rid of President Donald J. Ass-Clown vote. That's all it takes. The concerned and intelligent outnumber the Trumpsters 2-1. So vote. Better yet, get behind the local Democrats in you area and volunteer; make 10 phone calls. 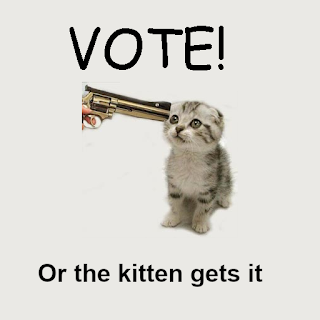