When the men with guns who have always claimed to be against the system start wearing uniforms and marching with torches and pictures of a leader, the end is nigh.
When the pro-leader paramilitary and the official police and military intermingle the end has come. 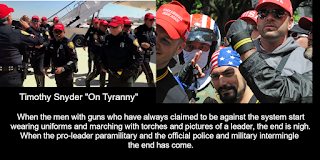 Posted by Gordon at 2:16 PM No comments:

I will tell you now that the best darn book case I ever owned was made from 32oz. Coke bottle crates and lumber 1/4"x 3' x 8's. They used to hold 6 "Family Sized" bottles, but my Susie (oops) Susan used to polish off 2 per day. She also had snickers for breakfast (sometimes 2) and would have eaten nothing but sugary crap if I hadn't cooked for her. Worse yet, she brushed her teeth once a day, had perfect straight white teeth and NEVER had a cavity.

She was the most intelligent person I ever knew and could play guitar better than me (than I?). She spoke 7 languages fluently with the flatist white girl accent on the planet. My foreign accents were far better than hers but I was speaking poppycock, while she was speaking the language.

She called me out of nowhere some 10 years after we said goodbye and told me not to "waste my life like (she) did" among other things. I asked her how I could get a hold of her and she said "that would be a very bad idea".

I was so worried about her, from her tone of voice and what she said, that I called the suicide hotline I used to work for in Florida. The best they could tell me is that it was an extension at the Regional Hospital where she worked. I called there, but try as I might they wouldn't even try to put me through to her.

We both worked on websites that listed the campaign funding of local candidates, that hardly anyone used. Several weeks later I was checking hers and her had husband posted a notice that said she had passed from brain cancer, the night she called me.

I will never know what to make of that, but I still miss her to this day.