Your Children's And Grandchildren's Future

We are selling out your Children's and Grandchildren's future.

1. We wrote checks for trillions of dollars because the Administration used this outbreak as an opportunity to make money and campaign for re-election. Even before the outbreak, the Republicans pushed through a tax bill that gave more than 80% of the benefits to the wealthiest top 10%; campaign donation pay backs.

3. The US clean water supply (and that around the world) is being bought up by companies like Nestle because they know what's coming. The water coming from our taps is so poisonous that everybody thinks nothing of needing a water filter. This administration is busy undoing what little protections there were either because  a. Obama did it or b. because of donations to politicians.

4. Nazis, racists (I refuse to call them white supremacists) and pinheads are infiltrating the armed service, police forces and city councils around the country. What happens when you have a (insert name of Democrat) for President sign on your lawn, or ACLU bumper sticker and 2 Proud Boys and a pinhead answer your home invasion 911 call?

What can we do?

1. Take back the money. Set the tax structure back to pre Reagan days when Billionaires were paying a decent share. NO ONE who makes a billion (or more) dollars a year should be paying zero taxes - period. End subsidies for billion dollar industries -

Imagine how much could be done with 20 billion for schools, or school nurses; and that's just one resource.

2. Fire the head of the EPA and his deputies. Bring the codes up to realistic standards and put the breaks on pollution. Beef up the enforcement section and bring the scientists back. Get Congress to put the regulations into law and put real teeth in them; if your caught dumping plastic in the ocean, your company and all it's assets are forfeit and sold to plant trees and make solar panels.

4. Simple, Nazi militias are banned in several countries. If your stated goal is to take over the country for the white (black, brown yellow or green) people or for any religion then you have an illegal militia. There is no gray area when it come to Nazis, Racists and Zealots. Lock them up.
Posted by Gordon at 10:02 PM No comments: 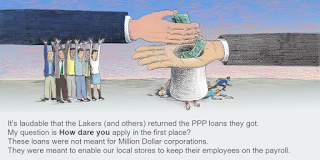 Posted by Gordon at 9:17 PM No comments: